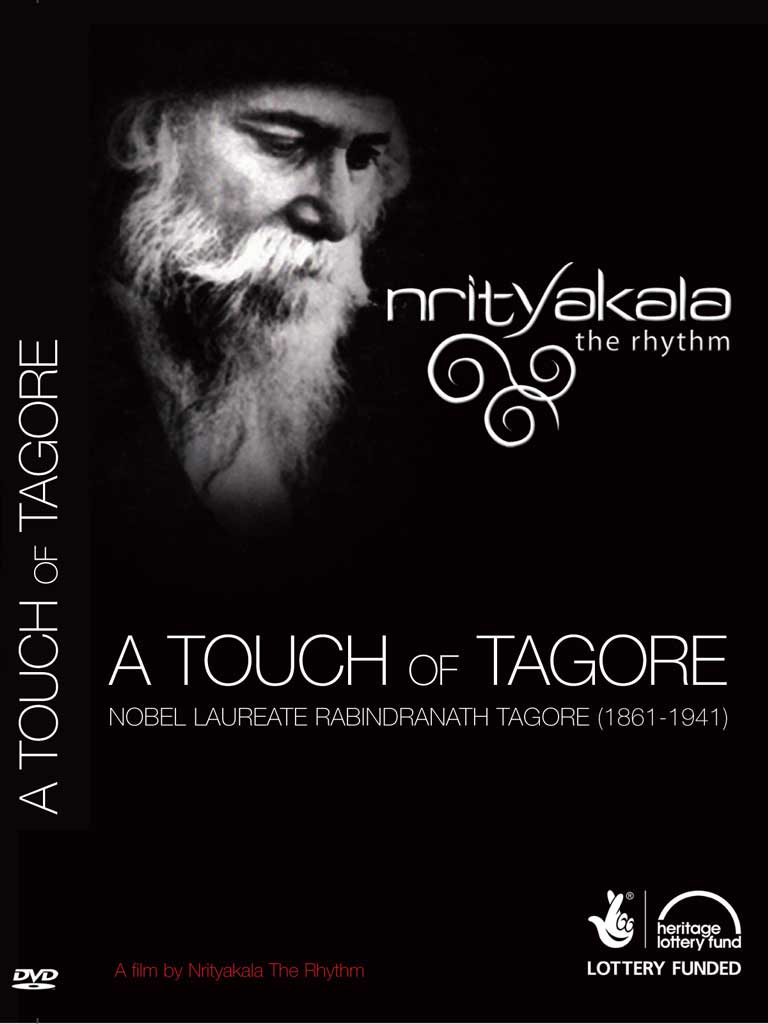 Bringing Indian culture to everyone.

Rabindranath Tagore These two films are the latest offering from Nrityakala The Rhythm, with the help of the Heritage Lottery Fund. A Touch of Tagore explores the works of Rabindranath Tagore through dance.  Tagore (1861-1941) was the youngest son of Debendranath Tagore, a leader of the Brahmo Samaj.  He was educated at home; and although at seventeen he was sent to England for formal schooling, he did not finish his studies there. Whilst in England, Tagore enhanced his love of poetry by studying Shakespeare.  In his mature years, he traveled extensively across several continents on lecture tours and tours of friendship and met many notable contemporaries such as Albert Einstein and H.G.Wells.  As a poet, novelist, musician, and playwright, he reshaped Bengali literature and music in the late 19th and early 20th centuries. As the author of Gitanjali and its “profoundly sensitive, fresh and beautiful verse”, being the first non-European to win the 1913 Nobel Prize in Literature, Tagore was perhaps the most important literary figure of Bengali literature. With his translations of some of his poems, he became rapidly known in the West.  He was a mesmerising representative of the Indian culture whose influence and popularity has reached a global audience.

Tagore was knighted by the ruling British Government in 1915, but within a few years, he resigned the honour as a protest against British policies in India. The highest education is that which does not merely give us information but makes our life in harmony with all existence.’

This DVD highlights how Tagore (dance) has touched many people’s lives, through a range of interviews with people from India, Pakistan, and England.  Each individual has a different story about how they have learned from the dance form of Tagore, and how they, in turn. have taught others  Tagore modernised Bengali art by spurning rigid classical forms. His novels, stories, songs, dance-dramas, and essays spoke to political and personal topics. Gitanjali (Song Offerings), Gora (Fair-Faced), and Ghare-Baire (The Home and the World) are his best-known works.  Globally he became the voice of India’s spiritual heritage; and for India, especially for Bengal, he became a great living institution.

The National Curriculum requirement for Key Stages 3 & 4, include:  Local & Global Citizenship, History, Drama, English & Music.  A Touch of Tagore fills the quotient needed for these areas.  The DVD looks at some History of Tagore Dance and the part it has played in Bengali History.  It also fills the criteria for Drama and music, through his poetry, plays

This website uses cookies to improve your experience while you navigate through the website. Out of these, the cookies that are categorized as necessary are stored on your browser as they are essential for the working of basic functionalities of the website. We also use third-party cookies that help us analyze and understand how you use this website. These cookies will be stored in your browser only with your consent. You also have the option to opt-out of these cookies. But opting out of some of these cookies may affect your browsing experience.
Necessary Always Enabled

Any cookies that may not be particularly necessary for the website to function and is used specifically to collect user personal data via analytics, ads, other embedded contents are termed as non-necessary cookies. It is mandatory to procure user consent prior to running these cookies on your website.